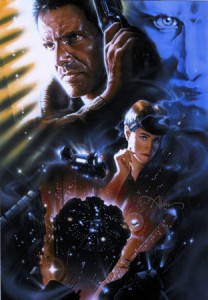 his art is my more personal commemorative to the enduring legacy of this great motion picture. When I created the original one-sheet for Blade Runner back in 1982, there were some concerns about Harrison Ford from Warner Bros. The concerns were unique to the creative challenge at hand: how do you depict a star, who we had come to know as the heroes Han Solo and Indiana Jones as a rugged, difficult to define lead character who gets beat up every fifteen minutes or so? Many interested parties thought that Roy should have the greater presence in the ad art. In dramatic terms, that would make sense but in publicity terms, Deckard had to have the prime focus and Roy was ultimately eliminated from the poster. Years later, as a personal homage to Ridley Scott and to my more original vision, I put Roy back in-actually larger than Deckard, but phantom-like and dangerous. I like to think of this art as not only a commemorative but as a first cousin to the original version. I was also able to fine tune Ford more to my artistic liking and then navigate the art without the input of too many cooks.